skip to main | skip to sidebar

Generally, the distance the CG should be ahead of the CP is equal to 1 or 2 times the diameter of the body of the rocket. Being closer than this could cause the rocket to wobble or even try to reverse its direction by looping in flight. Being farther than this could cause the rocket to be overly stable and veer off into a moderate wind instead of going straight up. This behavior is called “weather-vaning.” Of the two options, over stability is more desirable.

Finding the CG on a rocket, large or small, is relatively easy. Finding the CP is more difficult. One of the easiest methods for determining the stability of model rocket is to tie a loop of string around the CG of a model rocket and swing it around your head to see if the rocket is stable. This is called the “Swing Test”. This method works on smaller rockets, but does not necessarily prove that a larger rocket is stable or unstable. This is due to practical limits on the length of a string you might be able to swing around your head.

Example 1: At 10 feet of string length, a 24 inch rocket has the nose and tail moving through the relative wind at an angle of 2.9 degrees from ideal, or a total difference between the nose and the tail of 5.8 degrees. A rocket of this length will probably be able to be tested at this length.

Large or heavy rockets are difficult to swing and could be damaged if the rocket hits a stationery object or person during the test. A better way of determining the stability of rocket is to determine the CP by calculation. One of the best known methods is called the Barrowman method.

The Barrowman method calculates all the individual pressure changes along the rocket from nose to tip. After each change is calculated, the total of each element is added and a ratio is calculated from the same elements multiplied by the force value for each element.

To use the equations, the values measured from the rocket as illustrated above are substituted into the equation. Refer to the definitions below while taking measurements:

Barrowman Calculations
While this task seems daunting it can be done in stages using a calculator with square root capability. If you don't want to go to this trouble, you can download a free Winroc windows based software program the from our website at ModelRockets.us that can do this for you.

Here the CP value represents the center of pressure. Use the following  factors and calculations and then plug the numbers in the  Barrowman Basic Equation above (repeated at the end of this blog).

Calculating Fin Values
The LF value is needed for trapezoidal fins only. It can be measured or calculated with the following equation:

Final Results
After calculating each element of the rocket. They are applied in the final equation:

I get many questions from beginning model rocket modelers that want to know how to design model rockets for the best altitude performance. This interest varies between those who just want to get the best performance from a custom designed rocket to those who are involved in Science Fair or school projects. Most often the focus of the questions are on design issues associated with aerodynamic shape such as the nose cone or fin shape and often the questions center on just length and diameter. In the following discussion, I'll try to unravel the issues about model rocket performance.

To help divide the areas involved in model rocket performance, I've listed most of the factors that affect flight performance.

Gravity - A big factor. The only way to reduce gravity is to launch a rocket at an angle not perpendicular to the ground. Launching at an angle will increase the distance a rocket travels before coming back down. However, a rocket will not reach its highest altitude unless it is launched straight up, perpendicular to the ground. I’ve brought the issue of gravity up to illustrate that the most important issue regarding model rocket performance is:

Weight - As you can't change gravity, you can get the same affect by reducing the weight. This is because the speed of the rocket at engine burnout is proportional to the weight of the rocket. The following simplified equation illustrates this:

Where as:
v = Max Velocity in Feet per Second
I = Total Motor Impulse in Pound Seconds
g = Gravity at 32.2 Feet per Second Squared
W = Weight of Rocket at Burnout in Pounds

In this equation gravity is a fixed constant. So only changing motor impulse or changing the weight of the rocket will affect the burnout velocity of the rocket.

Power - Increasing the power has the same affect as reducing the weight. For instance let’s apply the velocity formula to the following examples...

As you can see, doubling the total impulse or cutting the weight in half has the same affect of doubling the velocity.

The above burnout velocity calculations do not take in to account the effect that aerodynamic drag has on the velocity. In the following section we will begin to deal with this issue.

Aerodynamic drag can have a significant impact on the velocity of a rocket in flight. For instance, the calculation of drag force is:

Air Density - Air density is about .97 at sea level and 70F. There is little that you can do about it other than launch on a hot day or take a trip up to the mountains where the air is less dense to launch.

Drag Coefficient - The drag coefficient is usually less than 1. Most rockets fall between .5 and .75. Only a very bad design would exceed 1. We will discuss this in some detail in the following section.

Aerodynamic Shape - The single factor which describes the shape of model rocket and the finish is the drag coefficient. Take a look at the 2 rocket designs on the right. The one on the left looks considerably sleeker than the one on the right.

So What Does All This Mean?

Aerodynamic shape has an impact on the drag force the rocket sees in flight. However, the diameter of the rocket has a larger  impact on drag calculations.

It is understood that the height the rocket is able to obtain is based on velocity over time. The import factors in the velocity are the weight and power of the rocket.

To achieve better performance from a rocket and higher altitude flights, focus on weight and power, first, then rocket diameter and lastly aerodynamic shape.


After many years of being involved with educational model rocketry...we decided to offer our own kits specifically designed for the teachers, students, scout troops and youth groups! 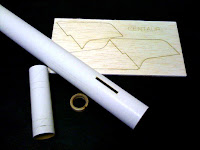 We listened to many of you who are involved in educational model rockety programs and decided to do things differently. We learned that there was concern about younger students and scouts using cutting tools...So we laser pre-cut everything, including thrust ring grooves, motor hook slots, fin slots and balsa fins. We even decided to laser pre-mark the tubes for centering rings, launch lugs and fins so using marking guides and doorways to draw your fin lines are a thing of the past! 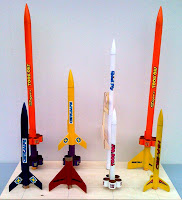 Our own experience with model rockets that were easily damaged by rough handling encourage us to make the tubes thicker and stronger. And, after building kits with cryptic instructions with little or no pictures or illustrations we decided to put as many 3D illustrations in our instructions as we could fit. We took the best ideas from all the model rocket kit manufacturers and added many of our own to come up with what we think is the best Model Rocket Kit Bulk Pack line being manufactured today.

Go to to our YouTube Channel for Model Rocket Flight and Instructional Videos.